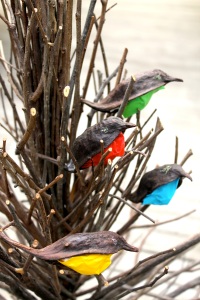 I was at mum’s the other day, and on the book shelf were these little, coloured birds placed in an ornamental tree – on closer inspection I realised that these little birds were made from seed pods! Bernice then took over, and began demanding answers – who made those birds? Where did the seed pods come from? How did you know how to make them? What tree/vine are the seed pods from?

…I was really impressed!

I don’t mean to sound surprised by mum’s artistic talents… but she always says she doesn’t know where mine come from (and insists it is from her mother!), and continues to say that she isn’t creative at all – I don’t agree with her, mum shows her creativity in different ways to me, but I don’t bother to argue the point.

I did get the answers to most of my questions:

– Mum showed my niece how to make them when she was visiting once day;

– She knew how to make these little birds from her Aunt Evelyn who lived in Ceres (just outside Geelong), she would make them and sit them on sticks. Mum thinks she might have even added feathers to the tail; Mum was quick to point out that Aunt Evelyn didn’t use coloured pieces of scrap paper scrunched in a ball, instead she would use stuffing and shiny red satin/silk to fill the pod.

– The pods were collected from the driveway of a house up the road (where they had fallen from the tree above);

– The only question mum had no answer for was what the name of the tree the pods came from.

The Kurrajong tree (Brachychiton populneus) produces the amazing seed pods that were used in making these birds.

The birds are meant to be Red Breasted Robins, similar to the one in the picture.

Naturally I asked mum to escort me to the tree up the road, where I collected all the seed pods that had fallen into their driveway (all the time telling myself that I was doing the owner of the house a favour by collecting these for  them – it would save them having the sweep them up!!). 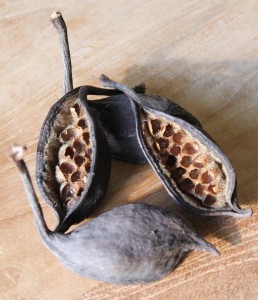 I kept them in a plastic bag, and sprayed inside the bag very generously with insect spray to kill and creepy crawlys that may have made their home in the seed pods – tying a knot in the bag to keep the spray inside for a few days.

After fumigation I took a metal skewer (a knitting needle or pen/pencil will do) and ran it around the inside of the pod to break away all the seed pod casing. They clean up really well… 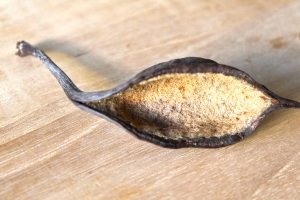 The next step was to create the robin’s red breast. I purchased some stuffing and shiny, red satin material (how much you need depends on how many robins you plan to make). Each robin requires a square of material and enough stuffing to allow the breast to bulge out of the pod.

Place the stuffing on the red material (with the shiniest side of the material facing away from the stuffing), and fold in the corners to meet in the middle, securing with a few stitches to form a rough ball.

Before the birds (pods) can be stuffed with the red balls (breasts) they need to have holes drilled into their backs to thread the fishing line to hang them (if you are making a mobile or hanging them). Take a very small drill-bit and make 2 holes close together around the middle of each pod.

Then thread the fishing line through the two holes and tie a knot (leaving a long piece of line coming from the outside of the pod to tie it to the stick/dowel to make the mobile.

Take one of the pods, and fill it with craft glue, then insert the red ball (stitched side first) into the pod.

Tuck in all the material to try and get a smooth finish to the material that is poking out of the pod. If your ‘breast’ doesn’t seem puffy enough, take it out and place some more stuffing into your ball.

Using a liquid paper pen (white-out), or a white pen, mark two eyes onto the outside of the seed pod (refer to picture for location).

I have decided to make a mobile with my little red breasted birds, however you could use them as Christmas decorations (using different coloured material), make legs for them and 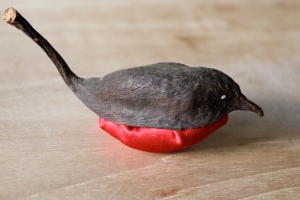 have them standing (I’ll leave the leg making technique to your imagination!).. there are no limits to what you could use these for.

To  make a mobile, you will need sticks/dowel and some fishing line. I am kicking myself that I can’t find the most perfect birch tree branches I had saved over a year ago to make a mobile – they are safely stored somewhere in the boxes we haven’t bothered to unpack between moves.

Instead I will be using sticks I cut from a tree in the garden (otherwise dowel from a craft shop or hardware store is fine). You will need the drill again to make holes in the two ends, and middle of the sticks/dowel, to thread the fishing wire through. 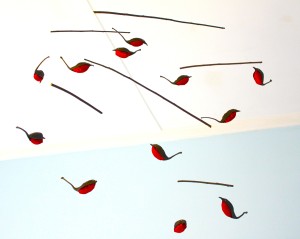 How you make your mobile is up to you, there are multiple ways you can tie the sticks, and how many you use – just play around and see what works for you… it also depends on how many birds you have to hang. I love these little birds, especially the way the seed pod creates the little tails and beaks for the birds.

The only challenge I have set for you is trying to find a Kurrajong tree to provide you with pods to make your own birds!

Tell me what you think… Cancel reply